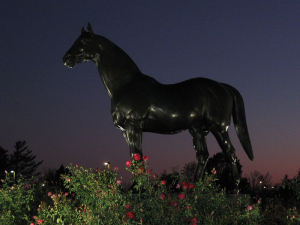 That's stud as in a horse, not as in a man.  Man o' War was one of the greatest horses in American racing history. Before he was put out to stud, Man o' War captured the public's attention as he won 20 races .... out of 21.  That's one hell of a winning percentage. This month is National Bourbon Month, so this bourbon based cocktail is timely.

Combine in a shaker with ice, shake with the dominating power of Man o' War thundering down the stretch in one of his many victories in 1919 and 1920, and strain into a chilled glass. 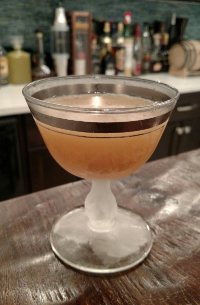 In honor of Man o' War I recommend you use bourbon from Kentucky, which was his home and is the epicenter of American horse racing.  Even though bourbon doesn't have to be from Kentucky (see this post about American Exceptionalism in alcohol), it would be appropriate in this instance.

There are other cocktails in the Den with ties to horse racing, e.g. the Mint Julep and the Derby.  The Derby is highly similar to the Man o' War, except the former uses lime juice and the latter uses lemon juice. Incidentally, the original Man o' War  recipe generically calls for orange curacao or triple sec.  Cointreau is a personal favorite.  Use whatever orange liqueur you prefer, just keep in mind that the resulting cocktail could be really sweet.