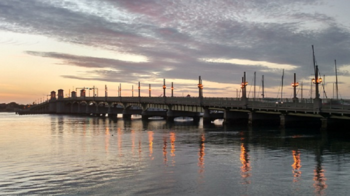 The Bridge of Lions at sunrise, St. Augustine, Florida.

When I say old school, I mean really old school.  As in 1565.  That is the year in which St. Augustine became a settlement, and the small Florida city has the distinction of being the oldest continuously occupied European settlement in the United States.  As I learned during a recent vacation, the city is home to a couple of fine cocktail bars and a good distillery.  Thanks to the SheKnows website for introducing me to this drink, the proportions of which I slightly adapted. 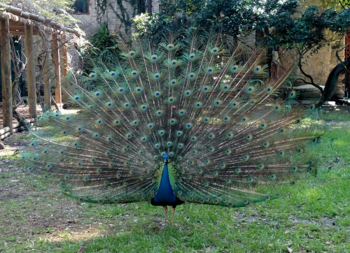 A colorful citizen of the Fountain of Youth park.

Combine in a shaker with ice, shake with the determination of the Spanish admiral who established the city (it wasn't the British who founded it) or the early Christian theologian for whom it is named, and strain into a chilled glass.  Lemon peel garnish optional.

The original St. Augustine calls for light rum, which gives it a pleasant and vaguely tart taste. For a more robust flavor use dark rum.  If you want a sweeter libation, cut back on the grapefruit juice and/or add more Cointreau.

Indulge in some relaxation and history, and have a St. Augustine!