Ol' Blue Eyes In A Glass -- The Frank Sinatra 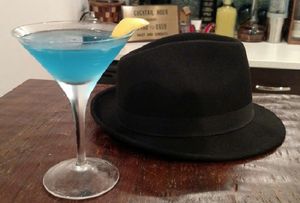 The late Frank Sinatra was a great American artist and icon.  Among other things, he was a wonderful singer with a gifted voice, an ear for the nuance of language, and a captivating stage presence.  He also was a pretty good actor (watch the first Manchurian Candidate movie).  Thanks to Scott Deitche and his book Cocktail Noir for introducing me to the original cocktail, which I adapted.  In honor of Ol' Blue Eyes, and his son (a performer who I had the privilege of seeing) who recently died, drink this. 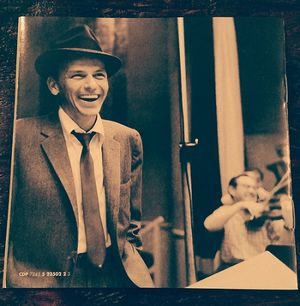 Combine in a shaker with ice, shake as if you were swinging on stage like the Chairman Of The Board, and strain into a chilled glass.  Lemon garnish optional.

Jack Daniel's whiskey was Sinatra's alcohol of choice.   While I would have liked to incorporate it into this cocktail, it's impossible to have a vibrant blue cocktail using Jack Daniel's as the base.  Ol' Blue Eyes drank plenty of martinis over the course of his life, although I doubt he drank one that looked like this.

Just as Sinatra covered songs that other people made popular, I did the same with this cocktail.  I substituted vodka, lemon juice, and super simple syrup for the gin and sour mix in the original.

When I perfected my version of the Frank Sinatra cocktail I put on some of his tunes and sang along.  Fortunately I'm much better at making drinks than I am at singing. Making and drinking cocktails with another person can be a special form of dancing. As Sinatra sang in Come Dance With Me -- for what is dancing, making love set to music, playin'.