Robert Burns was an 18th century Scottish poet and a big deal in the Romantic movement.  Even if you're like me and don't know much about poetry, you probably have heard his most famous poem -- Auld Lang Syne.  It's the song everyone massacres on New Year's Eve because they don't know the  words and/or have had too many cocktails (the title roughly translates as "days gone by" or "old times").

Combine in a shaker with ice, stir with the grace and passion of creating your own liquid poetry, and strain into a chilled glass.

Combining these ingredients may look odd, but they complement each other nicely.  You can adjust the ratios depending on the taste of the scotch you use, or how sweet you want the drink to be.  I suggest scotch constitute at least half of the Bobby Burns.

The Bobby Burns is one of many Scottish things and/or people that I like.  Others include the actor Sean Connery and bagpipe music.  Yes, bagpipe music.   If hearing a bagpipe rendition of Amazing Grace (click on the above link) doesn't move you, you have no soul.

Whether your cultural tastes run towards Robert Burns from Scotland or Montgomery Burns from The Simpsons, you'll like the Bobby Burns.  But unless you have Scottish blood in you, please don't start singing Auld Lang Syne.

Southpaws and Mobsters -- The Left Hand 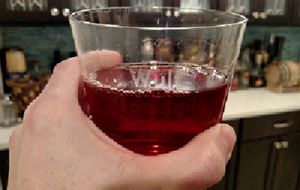 Combine in a shaker with ice, stir with the coolness of being among made men without being made as a rat, and strain into a chilled glass.

The Left Hand is a Boulevardier with chocolate or mole bitters.  The original uses mole bitters.  I know chocolate and mole are not exactly the same thing, but you're not going to go wrong with either one.

Donnie Brasco is very good at the depicting the tension and strain of operating as an undercover agent.  This scene is an example.   For movies with a similar theme, I highly recommend The Departed and Infernal Affairs, the Hong Kong movie upon which The Departed is based.

So what does the word "southpaw" have to do with this cocktail?  Southpaw is slang for a left hand.  The etymological origin of the word is hazy.  A prevailing theory is that the term originated in the 19th century.  At the time some baseball diamonds were laid out so home plate was on the west side (this kept the sun out of the batter's eyes), so a left handed pitcher's arm would hang south.  This means a left handed pitcher would use his "south paw."  For an entertaining cinematic soliloquy, watch Rocky Balboa explain it to Adrian (click here).

Even if you don't care about southpaws or mobsters, the Left Hand is a fine cocktail.  Capisce?

Enter The Dragon -- The Emerald Dragon 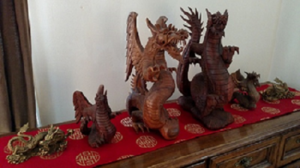 I have many dragons. The only emerald one is liquid.

As we're on the verge of Lunar New Year (better known as Chinese New Year), the Emerald Dragon is a timely cocktail.   It has nothing to do with the iconic Bruce Lee movie to which the subject title refers.  However, like the late martial artist and actor, the Emerald Dragon is deceptively powerful.  Thanks to The Intoxicologist for introducing me to it. 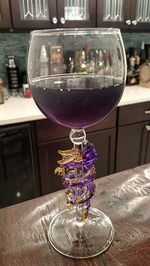 Combine in a shaker with ice, stir with Bruce Lee's speed and ferocity, and strain into a chilled glass.

The Emerald Dragon is sweeter than most of the other libations in the Wulf Cocktail Den.  This arguably makes it more dangerous, as it's easier to knock a couple of these back compared to other vodka based cocktails like a Vesper.  If you want an Asian themed vodka cocktail that isn't quite as sweet, try the Lychee Martini. When I made the Emerald Dragon the color really wasn't emerald (I know because my wife has a few pieces of emerald jewelry).  Maybe one of my Asian dragon sculptures distracted me.

So regardless of whether you celebrate Lunar New Year, or whether you want to monkey around with a new cocktail (this year will be the Year of the Monkey), have an Emerald Dragon!

Be Healthy And Be A Bar Regular

Can being a regular at a local bar be good for you?  Yes according to a recent study from the Department of Experimental Psychology at the University of Oxford (yes, that Oxford).  The study, titled "Friends On Tap,"  discusses the social benefits of going to a bar.

As the authors astutely note: "Making and maintaining friendships, however, is something that has to be done face-to-face. The digital world is simply no substitute."  I couldn't agree more.  If nothing else, a bar forces you to engage in the wonderful art of conversation.

Although "Friends on Tap" focuses on pubs and beer, the concept also applies to cocktail dens. My wife and I have been regulars at a neighborhood bar for many years.  We met many our close friends there, and we almost always meet fascinating people.

So go to a neighborhood bar, put down your smartphone, and speak with the person next to you.   Don't just take my word for it.  Take the word of a bunch of really smart British psychologists.