FDR and Scotch -- The Fireside Chat

President Franklin D. Roosevelt led the U.S. during most of the Great Depression and World War II.  Using the relatively new medium of radio to communicate directly with the public, his series of speeches known as the Fireside Chats helped explain his policies and restore confidence.  Contrary to some misconceptions, Roosevelt was not near a fireplace (he was sitting at a desk), and he did not utter the famous line "we have nothing to fear but fear itself" during one of the 30 Fireside Chats (it is from his first inaugural address). Thanks to Chilled magazine for introducing me to this cocktail. 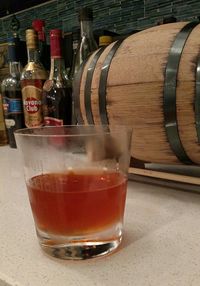 Combine in a shaker with ice, stir with the reassuring stability of a true leader during a time of crisis, and  strain into a chilled glass.  Lemon peel garnish optional.

The Fireside Chat is not far removed from a Rob Roy, which is a Scotch based version of a Manhattan. The recipe in Chilled calls for Scotch from the Islay region. as well as Grand Marnier.  As far as I'm concerned, you should use your favorite Scotch so long as it has a distinct smoky flavor.  My wife has a wide selection of smoky Scotches; we used Lagavulin 16 for the Fireside Chat.  I like Grand Marnier, but I prefer Cointreau for two reasons.  One, for me Cointreau has slightly more of an orange flavor because, unlike Grand Marnier, it does not contain Cognac.  Second, right now I don't have any Grand Marnier in my bar and I'm too lazy to get a bottle.