Wulf Cocktail Den
Home Archives About Subscribe
What's In Your Bourbon?
A Drink For Goin' Anywhere -- The Midnight Train

Old school done right can be a wonderful thing.  I'm not referring to the funny movie Old School (but as fraternity movies go it is not nearly as good as the classic Animal House).  The Whiskey Sour appears to have originated a couple of centuries ago when British Royal Navy sailors combined whiskey and lemon in order to combat scurvy, which is due to a vitamin C deficiency.  Scurvy is not a modern problem, but a bad Whiskey Sour is.  It can go wrong quickly due to bad ingredients, bad technique, or both.  Go back to basics and use the KISS principle (Keep It Simple, Stupid). 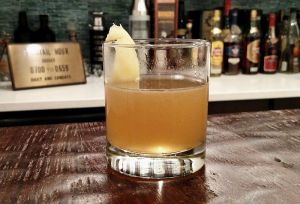 Combine in a shaker with ice, shake as if you're at the Delta Tau Chi toga party, or you're Gene Simmons rockin' out (this is the other KISS principle -- rock and roll all night and party every day), and strain into a chilled rocks (no pun intended) glass.  Lemon garnish optional.

So what type of whiskey should you use in a Whiskey Sour?  Whichever one you like.  I prefer bourbon or rye, and Tennessee whiskey does quite well.  And if you're not into whiskey? Use vodka instead and you more or less have a Lemon Drop. While the whiskey you use is important, using fresh lemon juice is critical.  None of this sour mix crap.  If someone tries to make you a Whiskey Sour with a mix instead of fresh lemon juice, run as if your liver depends on it.  Because it does.  After all, life is too short to drink bad cocktails.