Wulf Cocktail Den
Home Archives About
For Kings (County) and Dem Bums -- The Brooklyn
What's In Your Bourbon?

A Cure For Cancer -- The Cancer Killer #1

Cancer sucks.  Fortunately people can and do beat it.  My friend Stephanie is one of those people.  Last year she learned that she had breast cancer.  When that happened I promised her I would create a cocktail when the cancer was gone.  After undergoing chemotherapy and surgery, Stephanie triumphed.  A new year and a cancer free diagnosis deserve a new original creation -- the Cancer Killer #1. 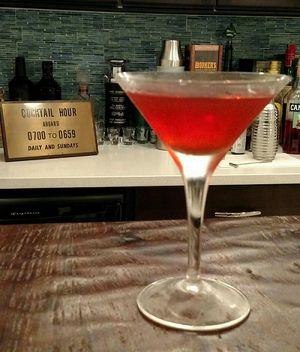 Combine in shaker with ice, stir with the inspiring defiance Stephanie and others show when they fight cancer, and strain into a chilled glass.

The Cancer Killer #1 is a commissioned cocktail.  I'm not comparing myself to Michelangelo, nor am I comparing Stephanie to one of the Medicis.  I asked her what flavors she preferred in a new cocktail.  She mentioned rye and orange.  Immediately I thought of Cointreau because it is a great triple sec (a generic term for orange liqueurs).  I added Campari because it is one of the harsher amari (bittersweet liqueurs).  The treatment for cancer can be downright brutal, and Campari is a reminder of that bitterness.

The Cancer Killer #1 will not really cure cancer (that should keep the FDA off my back).  However, it happily fulfills my promise to Stephanie.  In addition, it is an excellent cocktail to celebrate those who defeat cancer, and those who are working to defeat it.  Death to cancer!