Rise From The Dead -- The Corpse Reviver #1

Does this have something to do with a zombie apocalypse movie?  Nope.   Corpse Revivers, which originated around the turn of the 20th century, were an old school "hair of the dog" -- you used one to rejuvenate yourself after a night of heavy drinking.  Thank the late Harry Craddock, head bartender at the Savoy Hotel in London, for saving some of the recipes, and thank Marvin Allen, head bartender at the Hotel Monteleone in New Orleans, for introducing me to this cocktail. 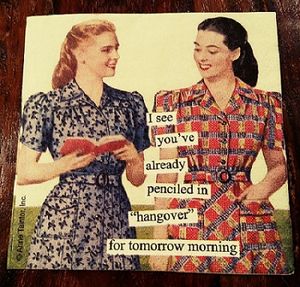 Combine in a shaker with ice, stir with the slow deliberation of trying to do anything with a hangover (don't act innocent -- you know what I'm talking about), and strain into a chilled glass.  Orange peel garnish optional.

Calvados is an apple brandy.  Calvados is to apple brandy like Cognac is to grape brandy -- it's all about geography (in these cases, regions in France ... for more read Torched Dutch Grapes). You'll probably have an apple brandy or two at your local liquor store. If not you have the Internet.

Almost all versions of the Corpse Reviver #1 have at least 50% grape brandy.  I prefer this version because it has more of an apple taste and the proportions are really easy to remember.

If you see a Corpse Reviver on a cocktail menu, take a good look before ordering.  Most likely it will be the gin based #2, not the brandy based #1.  I don't care for many types of gin, and like most people, I'd rather be #1 at something than #2.  Even if that something is reviving my corpse.

Awesome site josh! I will be playing with a lot of these soon behind the bar at Neyla. Thanks for stopping in last night!

It is always a pleasure to meet a professional like you. I'm so pleased you like the Den's site. Let me know what happens when you play with the cocktails behind the bar,