Inspiration can strike at any time.  This citrusy epiphany came one night as I stared at the lineup of homemade liqueurs in my refrigerator.  The number three is important in American society, e.g. three branches of government, the Triple Crown in baseball and horse racing, etc., so I decided to see what I could do with three ingredients of the same flavor.  And voila -- the Triple Orange. 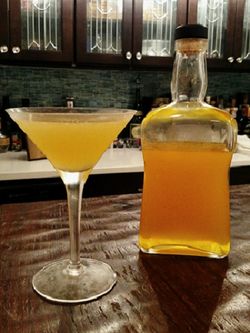 Combine in a shaker with ice, shake with the excitement of winning the Triple Crown (like you're Miguel Cabrera or American Pharoah's owner), and strain into a chilled glass.  Orange peel garnish optional.

You make Lupo arancello just as you would make Lupo limoncello, but you use oranges instead of lemons. If you can't wait to make a batch of arancello, use Cointreau or something similar as a substitute.  However, as arancello is sweeter (half of it is super simple syrup) if you use a substitute you may want to scale back on the juice and/or bitters, or add some super simple syrup.

Plan to have three Triple Oranges?  To paraphrase the old Doublemint gum commercial, you'll have triple the fun.  And probably triple vision and triple the hangover.