Jackson Square (with St. Louis Cathedral in the background) is a popular spot in New Orleans.

A $20 cocktail?!  Isn't that expensive?  Yes, but it doesn't really cost $20.  So why call it a $20 cocktail?  Because it pertains to Andrew Jackson. Who?  The guy on the $20 bill. Before he became the seventh President of the United States, Jackson was best known for defeating the British at the Battle of New Orleans in 1815.  So why the funky French name?  Because the famous Jackson Square in New Orleans used to be known as the Place D'Armes.

Thanks to Marvin Allen, a great bartender at the legendary Carousel Bar at the Hotel Monteleone (and author of the excellent book Magic in a Shaker) for introducing me to this cocktail. 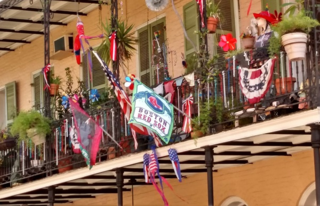 Combine in a shaker with ice, shake as if you're leading the charge against the British, and strain into a chilled glass.

Even though the Place D'Armes is a year round cocktail, to me it's particularly refreshing during the summer months. The Place D'Armes is similar to the Ward 8.  Both have rye as the base spirit, incorporate citrus juices, and use grenadine as the finishing touch. Who knew there's a vague New Orleans-Boston (or N'awlins-Bahstun) cocktail connection?  You do now.