Pride Of Peru (With Protein!) -- The Pisco Sour 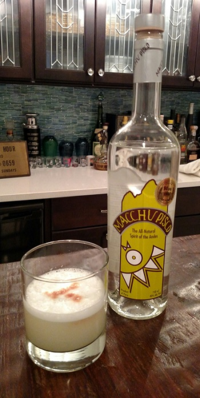 It's refreshing, delicious, and contains 3.6 grams of protein (the amount in an egg white according to the U.S. Dept. of Agriculture).

Pisco is a grape brandy from either Peru or Chile. The Pisco Sour originated in Peru.  In 1916 American bartender Victor Morris opened what became a popular bar in Lima, and adapting a local recipe, a Pisco Sour on the menu by 1921.

Pisco is popular enough that you can get it in liquor stores. If you order a Pisco Sour in a bar you may have to ask the bartender to add the bitters.  Not only are the bitters visually appealing, but they give the drink a nice little twist.

I'm not going to weigh in on whether Peru or Chile has the right to claim exclusive ownership of pisco.  So which version of the Pisco Sour do I prefer?  My research indicates that the Peruvian version has egg white and bitters, but the Chilean version does not.  I love protein, so I'm going with Peru on this one.  Hope that doesn't make me persona non grata in Chile.