A Cocktail For Independence -- The RWB

In honor of the Fourth of July (note to my foreign readers -- this is Independence Day in the United States), it's time to create a cocktail that celebrates the Red, White & Blue.  And rye whiskey and bourbon.  Either way you get the acronym RWB.  Just as the 13 colonies joined together to form the United States of America, here's how to join rye and bourbon: 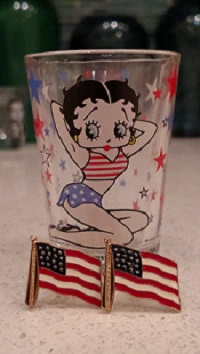 Combine in a shaker with ice, shake as if you're vigorously signing the Declaration of Independence, and strain into a chilled glass.  Sugar rimmed glass optional.

The RWB is very similar to a Sidecar in that it replaces the brandy or cognac with rye and bourbon.  Bourbon is a classic and legally American spirit, and rye was a popular spirit when the United States fought for its freedom.

You might wonder why there is a French liqueur (Cointreau) in a cocktail that celebrates American history. There are two reasons.  First, I like the flavor and it enhances the RWB.  Second, it acknowledges France's role as an ally of the United States during its fight for survival.  The United States returned the favor in the 20th century -- twice.

So declare your independence from the tyranny of weak cocktails, and have a RWB!