When it comes to dark liquors I'm a bourbon and rye man. My wife loves Scotch, so the Affinity is for her and all of the other Scotch lovers out there (she also loves bourbon and rye). The Affinity came out of New York City in 1907.  It was the epicenter of a financial crisis in the United States when an unsuccessful attempt to corner the copper market led to overextended banks, which then led to a run on the banks. 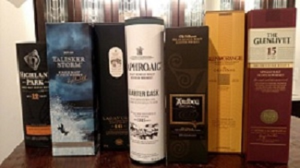 As you can see, my wife has an affinity for Scotch.

So what about the name?  In 1907 "My Affinity" was a common phrase in pop culture, so the word worked its way into the cocktail world.  If you have an affinity for Scotch or someone who does:

Combine in a shaker with ice, stir with your clear affinity for cocktails, and strain into a chilled glass.

Most recipes for the Affinity use equal proportions of the three liquors.  I used a less traditional version in order to emphasize the Scotch.  If you use a more assertive blended (not single malt) Scotch you may want to use the  traditional proportions. Sharp eyed readers of the Den will notice this cocktail is similar to a Perfect Manhattan except it uses Scotch instead of bourbon or rye.

To paraphrase Buzz Lightyear, to Affinity and beyond!