For Kings And Queens -- The Royalist 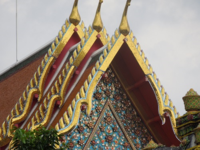 The Grand Palace in Bangkok is an example of royal magnificence.

As an American, the concept of royalty is foreign (literally and metaphorically) to me.  There have been great kings and queens throughout history, and there are some with us today.  My personal favorites are the longest reigning king and queen on the planet -- King Bhumibol (pronounced pumepon) of Thailand and Queen Elizabeth II of the United Kingdom. Both have reigned for more than 60 years, and I've had the honor of seeing (and in one case entering) their palaces.  To honor the king or queen in your life, make this:

Combine in a shaker with ice, stir with the pageantry of the changing of the guard at the Grand Palace or Buckingham Palace, and strain into a chilled glass.

A great depiction of the Changing of the Guard at Buckingham Palace in London.

Like a rebellious colonist, I am proud to say that I committed liquid treason against this particular crown.  The original cocktail, which dates to 1937, uses more dry vermouth than bourbon (to make it switch the proportions in my recipe).  I like bourbon more than dry vermouth, and using bourbon as the base spirit puts an American spin on the cocktail. You'll see the Royalist bears a very faint resemblance to the Manhattan. To put things in modern historical perspective, this cocktail predates the reign of King Bhumibol (who was born in the United States when his father attended Harvard) by nine years and the reign of Queen Elizabeth II by 15 years.