A Drink For Austin Powers And The Hulk -- The Whiskey Smash 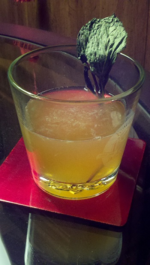 Austin Powers would say "This drink is smashing baby! Yeah!" The Hulk would ... you know.

The Whiskey Smash dates back much further than the hilarious British secret agent spoof and everyone's favorite green superhero. Smash cocktails came on the scene in the 19th century, and this article in Imbibe magazine gives good historical background.

Muddle the lemon and mint in a shaker, add the super simple syrup, bourbon, and ice, shake like you're the Hulk smashing someone or Austin Powers shagging a babe, then strain into a chilled glass.

The Whiskey Smash essentially is a cross between a Mint Julep and a Whiskey Sour.  A julep has a spirit, herb, and sweetener, and a smash is a julep with added citrus. It's easy to adjust the ratios of the ingredients in the Whiskey Smash to suit your taste for tartness, sweetness, and booziness.  When it comes to the muddling, you don't need to be like you're Dr. Banner in desperate need of an anger management program.

No disrespect to the Hulk, but Captain America is my favorite Avenger.  He exudes honor, stands up to bullies of any stripe, acts like a gentleman, and kicks Nazi ass. Now go get smashed!