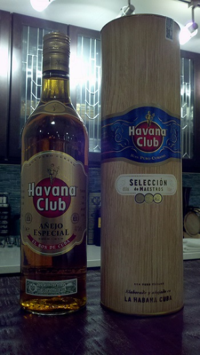 Cuban rum is liquid forbidden fruit in the U.S.  It was the base of a daiquiri I had in Panama, and the cocktail was glorious. Until very recently it was illegal to transport Cuban rum into the United States.  Even though changes in federal regulations now  allow people to bring in limited amounts of Cuban rum in certain circumstances, distributors still can't ship it to the States.

My wife and I recently seized the opportunity to get Cuban rum with both hands (technically four between the two of us).  While going through duty free in the Dominican Republic (another country that makes excellent rum) we came across a display of Havana Club.  In the blink of an eye a couple of bottles were ours.  We didn't lie when we came through Customs -- we declared that we were carrying rum.  We just didn't mention what country produced it.

Is what we did rumrunning?  Technically no because what we did is legal.  But the experience was fun and allowed us to channel the spirits (pun intended) of some Americans during Prohibition.

A quick note about Havana Club -- read the label to confirm its origin.  According to my research some rum distributed under this name is made in Puerto Rico, so obviously there's no problem with bringing that product to the mainland (as I once had to remind an ignorant client, Puerto Rico is part of the U.S.).  Don't worry, the bottles in the picture come from Cuba.  My wife and I read the labels.  Twice.