For Your Inner Rule Breaker -- The Scofflaw

The Scofflaw is unusual in that both the word and the cocktail originated during Prohibition.  In 1923 a Boston newspaper sponsored a national competition to create a term defining a lawless drinker, and the word "scofflaw" was the winning entry.  It immediately entered the popular vernacular and has been with us ever since. The cocktail came from Harry's Bar in Paris in 1924. 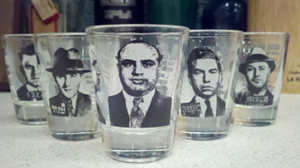 Combine in a shaker with ice, shake like you're running from The Untouchables (your choice about whether Robert Stack or Kevin Costner is Eliot Ness), and strain into a chilled glass.

Thanks to Herbs & Rye, a great off Strip bar and restaurant in Las Vegas, for introducing me to this cocktail.  I knew I would like the place as soon as I saw that it listed its cocktails by era.

Just remember -- cocktail history is part of American history.  So appreciate history and have a Scofflaw!

Interesting, and I’m definitely going to give this one a go when I’m able to have alcohol again. Our daughter bought a beautiful older homes in Mt. Arlington, N. J . It has a Speakeasy! A door disguised as the wall moves and opens to a lovely bar. I love it! We make use of it whenever we visit. Kind of makes me feel akin to a Scofflaw. Cheers!

Apologies for the delay in responding. That's great about the speakeasy. It sounds like a perfect place to enjoy a Scofflaw!