Spirits For Spirits -- The Lupo Voodoo 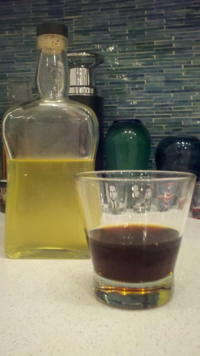 Get some liquid religion (of the voodoo kind)!

Voodoo is a religion, so why not have a cocktail that might put you in a state of religious or spiritual ecstasy?  My only interaction with voodoo has been seeing the grave of Marie Laveau, a famous priestess, as part of a cemetery tour in New Orleans (it's more fascinating and less morbid than it sounds).  After seeing the Island Voodoo cocktail on liquor.com I decided to adapt it for the Wulf Cocktail Den.  Here is my version:

Combine into a shaker with ice, stir as if you're conjuring some spirits to deploy their power on your behalf, and strain into a chilled glass.  Flame kissed orange peel garnish optional.

You'll notice this isn't much different than the Lupara. The bitters aren't critical, but they turn a really good cocktail into a great one.  The original cocktail uses Averna Limoni, which is a Sicilian limoncello that is 54 proof. In comparison, my Lupo limoncello is 95 proof.

As an aside, if you really want to see an amazing above ground cemetery outside of the United States, go to La Recoleta cemetery in Buenos Aires, Argentina.  It is stunning in its size and opulence.

Now go to your liquor cabinet, get what you need, and hoodoo that Lupo voodoo that you do so well.