Bonjour Y'all -- The Bourbon Renaissance 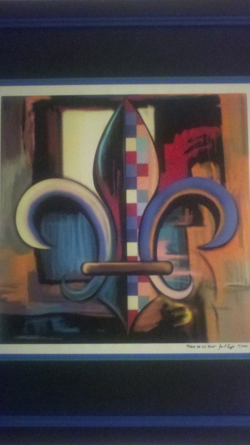 A colorful version of the classically French fleur-de-lis

Even though bourbon is a classic American spirit, the origin of its name is French.  In Colonial times Bourbon County, Kentucky, which was much larger than it is now, became known for the liquor its people distilled. The county's name derived from the French royal House of Bourbon.  If you want to study bourbon (or Bourbon) consult blogs, books, and articles from people who are much smarter than me.

I adapted this cocktail from the Bourbon Renewal featured in Imbibe magazine. As the French word "renaissance" means rebirth, and as there has been a dramatic resurgence of bourbon's popularity, I consider this cocktail as an example of the rebirth of the American love affair with bourbon.

Combine in shaker with ice, shake like you have beaucoup de joie de vivre, and strain into a chilled cocktail glass.

So what's crème de cassis?  It is a blackcurrant liqueur from ...... you guessed it, France (another reason why I use a French word in the name of this cocktail).  You may be familiar with it because it is an indispensable part of the Kir or Kir Royale. Crème de cassis is not much stronger than wine.