Wulf Cocktail Den
Home Archives About Subscribe
The Red (definitely), White (not as much), and Blue of Wine
Side Notes To The Sidecar 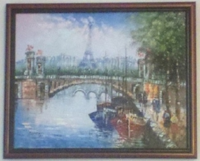 While there is some dispute as to whether London or Paris is the true birthplace of this libation, the general consensus is that it became famous in Paris shortly after World War I.  The drink is named for the motorcycle attachment.  Nowadays you only see it if you watch movies that are set in the first half of the 20th century.  My completely speculative tongue-in-cheek theory is that the Sidecar was a very early, very French way to prevent drunk driving  -- if you have a Sidecar, you’re going home in one.

Like many of the cocktails in the Wulf Cocktail Den, the Sidecar does not have many ingredients.  That makes it easier for simple cocktail enthusiasts like me.  It seems like everyone has a theory about what proportions are “correct.”

My suggestion is that you start with the recipe below, read the side notes in the next post, and then if you prefer modify it your own taste.  I will not be offended if you ultimately decide to use different proportions.

2 ounces of brandy, preferably one classified as VSOP or XO
.75 ounces Cointreau
Juice from 1/4 lemon

Combine with ice in shaker, shake like you’re hurtling down the Champs Elysees on a motorcycle without shocks, then strain into chilled martini glass.  Sugar rim on glass optional.

A votre sante!  If I recall my high school and college French correctly, that is a toast that means "to your health!"  Although in this case it could mean "make me another Sidecar!"