Side Notes To The Sidecar

The brandy is the key component of the cocktail (see my previous post here).  I’m not a brandy connoisseur, so I don’t have an opinion about which brands are better.   As with many liquors, e.g. bourbon, producers age brandy before bottling and selling it.  You know those letters on the label of a brandy bottle?  They signify the age.  VS (very special) is at least three years old , VSOP (very superior old pale) is at least five years old, and XO (extra old) is at least six years old.  My understanding is that older brandy is usually better.  Will a Sidecar made with a XO brandy taste exponentially better than one made with a VSOP brandy?  I doubt it (this statement will have brandy purists calling to have my head under a guillotine).

Cointreau is a French liqueur made from sweet orange and bitter orange peels.  I think it may be the original triple sec, which is the French term for an orange flavored liqueur.  There are other triple secs on the market, but in my opinion they are too sweet.  Cointreau has a smoother taste with just the right amount of orange flavor.  I have not tried making a Sidecar with Grand Marnier but my guess is the pairing works quite nicely. 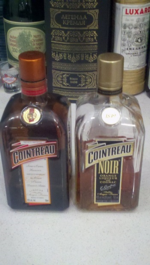 If you can get Cointreau Noir (which is a blend of Cointreau and cognac), try it in a Sidecar and see what you think.  When I used Cointreau Noir, the result was a Sidecar with a slightly stronger brandy flavor without any real diminishing of the orange flavor.  Of course, this result should be no surprise, as cognac is a very specific type of brandy.  You can't call brandy cognac unless it hails from the Cognac region of France, just like you can’t call sparkling wine champagne unless it comes from ….. you know where.

Frequently bartenders will serve the Sidecar in a sugar rimmed glass.  My research indicates that originally the Sidecar was not served with a sugar rimmed glass, but this practice definitely was in place by World War II.  I have no personal preference as to whether the glass has sugar on it or not.  When I make Sidecars at home, I prefer simplicity (laziness?), which means no sugar.  If you think the Sidecar might be a little too tart for you and/or your cocktail imbibing companions, the sugar is an obvious way to make the drink sweeter.