Continuing a fine tradition, when my wife recently had a business trip to Austin I reprised my role of the freeloading husband and joined her.  Of course, I had to revisit CU29, my favorite cocktail bar in a city that is not like the rest of Texas (Keep Austin Weird is a local slogan).  In case you’re wondering,  the name of the bar is the symbol and atomic number for copper on the elemental table. 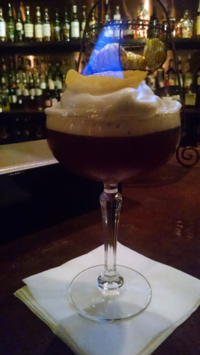 If I ever try to make a Friendly Stranger, a fire extinguisher will be in close proximity

CU29 has all the elements (pun intended) of a damn good cocktail bar – extensive alcohol selection, professional bartenders who are friendly and knowledgeable, and a cocktail selection that lends itself well to those in an adventurous mood.

Also, CU29 has a revolving group of infused spirits and cocktails.  When I went there a year ago, I sampled the brisket infused bourbon.  This year it was the barrel aged Boulevardier.  It had a slightly different taste than the Boulevardier that I discussed in a previous post.  CU29’s Boulevardier did not have as sharp a bite as my version of the cocktail.  My uneducated guess is that the difference in taste is due to proportionally less Campari, the barrel aging process, or both.

Some of the cocktails on the bar’s list are clever variations of classic cocktails.  For example, the Lu in New Orleans is a spin on the Sazerac, and the Pineapple Rum Old Fashioned uses dark rum instead of bourbon as the base.  Other cocktails are very original, such as the Friendly Stranger.

Bottom line – if you want a good cocktail or two in Austin, CU29 is where you need to be.