Wulf Cocktail Den
Home Archives About
Side Notes To The Sidecar
How Much Do You Drink?

A Mexican version of a French cocktail?  Am I fou?  Am I loco?  (Those are the words for crazy in French and Spanish).  Perhaps. Is my command of the Spanish language limited?  Absolutely.  It is true that France and Mexico haven’t always gotten along.  For example, Cinco de Mayo actually celebrates a Mexican victory against a larger French military force.  Contrary to popular belief, or at least Americans who “celebrate” the holiday, Cinco de Mayo is not the Mexican counterpart to the Fourth of July. 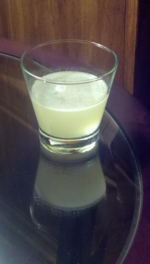 If you have too many of these, vaya con Dios

So what is in this variation of the wonderful  Sidecar?  I’m glad you asked.

Combine in shaker with ice, shake like you’re fighting against l’Armee Francaise at the Battle of Puebla, and strain into a chilled cocktail glass.  Lemon garnish optional.

Those of you who are astute observers will notice that this cocktail is not far removed from the traditional margarita.  Remove the orange bitters, replace the lemon with a lime, and there you go.

A quick word about tequila …… always go for tequila that is 100% agave, i.e. no Jose Cuervo.  Like the brandy you use in a Sidecar, one classifies the tequila you use in a Mexican Sidecar based on its age.  Blanco tequila is aged up to two months, reposado tequila is aged between two months and one year, and anejo is aged for at least a year.  Unlike bourbon, which must be aged in new barrels, tequila frequently is aged in used barrels whose previous occupants may have been other spirits such as bourbon or cognac.  Isn’t that a great example of the transnational nature of liquor?