Depending on your perspective, this cocktail is either: (1) a Manhattan with Campari instead of Angostura bitters, or (2) a Negroni with bourbon instead of gin.  As I love Manhattans but don’t like gin (at least the London Dry type that is most prevalent in the U.S.), I will go with the first option. I like the following recipe:

Combine everything with ice in shaker, stir, and strain into chilled cocktail glass.  Garnish with orange or lemon peel.

The 1:1:1 ratio is easy to remember. Many people aren't wild about Campari, an Italian amaro (bitter liqueur) because of its sharp and sort of medicinal taste. Until I came to appreciate Campari, as well as other amari, I used two ounces of bourbon and .75 ounces of the sweet vermouth and Campari. 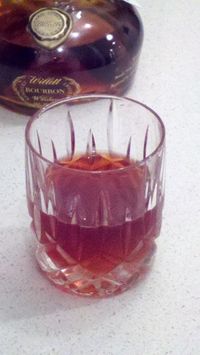 So what is the history between this American-Italian-French beauty?  Courtesy of Imbibe magazine and the New York Times, I learned that an American bartender named Harry McElhone created the cocktail in the 1920s.  Obviously bartenders couldn’t ply their trade legally in the U.S. during Prohibition (which will be the subject of one, if not many, future posts), so some of them such as McElhone relocated to Europe.

Now we have the American aspect (McElhone) and the Italian aspect (Campari) of the cocktail.  So where is the French aspect?  And more importantly, Whiskey Tango Foxtrot is a Boulevardier?

Editor’s note – if you’re not familiar with the acronym WTF, then you’re even more behind the times than I am.

Thanks to my sources at Imbibe and the New York Times, apparently in the 1920s the Boulevardier was an English language literary magazine in Paris that catered to people far more intellectual than I am.  The magazine’s editor, also an American, was one of McElhone’s loyal customers.  So now you know the French connection (apologies to the classic crime film from the early 1970s starring Gene Hackman).