It's Not Easy Being Green(ish) -- The Daiquiri

This might be what Kermit the Frog drinks when he's alone, with Ms. Piggy, or hanging out with the other Muppets.  He probably likes the color.  I'm just guessing.

Jennings Cox, an American working in Cuba, gets the credit for creating the Daiquiri more than 100 years ago. How could time turn such a simple and wonderful cocktail turn into a sickly sweet mess?  I suggest the following reasons: (1) the far too prevalent use of prepared mixes, and (2) the tendency to overuse blenders and ice.  The first makes the cocktail too sweet, and the second makes it too cold.  Either one overpowers any flavor that’s left. 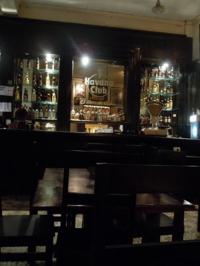 Just as many cinematic franchises in recent years have rebooted, gone back to the basics, and reaped serious dividends at the box office, e.g. James Bond in Casino Royale, Batman in the Dark Knight trilogy, etc., let’s return to the classic Daiquiri.  There are three and only three ingredients – rum, fresh lime juice (emphasis on fresh), and simple syrup or sugar.

I prefer to shake Daiquiris, but a very lightly blended daiquiri does just fine.  The best Daiquiri I ever had was lightly blended with Cuban rum at Vieja Habana (Old Havana), a great Cuban bar in Panama City, Panama.  Here is my recipe: 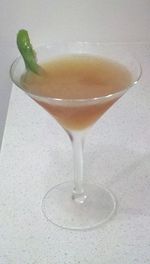 Combine in shaker with ice, shake it like you’re doing a hyper-caffeinated version of (insert your favorite Latin American dance style here), and strain into a chilled cocktail glass.  Garnish with lime.

Traditionally one uses light rum. Dark rums work quite well, too. The rum in the pictured Daiquiri is Barcelo Imperial from the Dominican Republic. It is a dark rum, so that affects the color. My suggestion – if you like a particular rum, regardless of its color or where it is produced, use it in a Daiquiri.